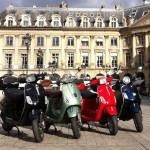 It’s interesting to know what is presently being discussed in France! Guess what …….. the prohibition to use 2 wheeled motorised vehicles, in Paris, to reduce pollution!! This might come to a surprise to the majority of us but guess won’t be much to the French people!! This isn’t something new at all, the French people might remember when it was first heard in 2005! It was then mentioned again in 2011 and again in 2012! Looks like now it’s getting close to materialise though! Christophe Najdovski, the person responsible for transport and public space, is putting this idea, or theory …. Call it whatever you want, back on the table! It seems like it’s going in the right direction too and this is surely annoying to most!

Mr Najdovski has announced that, should this is passed, starting from the 1st of July 2016, any 2 wheeled motorized vehicles manufactured before the year 2000 will not be allowed to circulate anymore in the capital, Paris! Some might say that that’s not 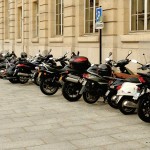 too bad but seems like this won’t stop there then! If this law passes, then it is expected to be enforced in due course! No details has been given as yet but we’re expecting the year of manufacture to increase bit by bit and maybe eventually also end up being based on the co2 emission! So, this is just the beginning of it and where this will end no one knows exactly!

This will surely cause serious problems with mobility! It’s already difficult to use your own or public transport in Paris, imagine reducing the number of scooters and/or motorbikes! Which kind of transport will they use? If they had to use the public transport there might not be that much of an effect, apart from some more congestion in buses, but what if they had to use their cars, like for sure some will do? This will add to the already chaotic traffic situation in the streets of central Paris! 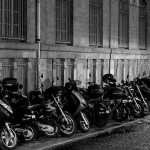 What’s even more worrying is that some are even expecting to eventually see this ending up with an inclusion of those transport vehicles using diesel engines! What if this really happens and won’t be able to circulate in the city neither?

The FFMC, Fédération Française des Motards en Colère, is calling this a “non-sense”! According to them, and based on some statistics, not allowing pre 2000 2 wheeled motorized vehicles, won’t make much difference since the percentage, when compared to newer vehicles, is almost to none!

Demonstrations against this project are being organised by the FFMC on the 8th & 9th February! 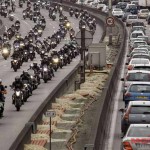 On the 8th, all bikers are invited to meet at the square of Vincennes’s Castle at 14:00, for a ride that will end in front of the Mairie / Mayor of Paris and on the 9th at 09:00 in front of the Mairie de Paris! They’re expected to stay outside demonstrating against this during the debate of the same project!

Do you live and/or work in Paris? Do you own a 2 wheeled motorized vehicle manufactured before the year 2000? Will you be effected with this law? Let us know what you think about it!!