It’s that time of the year when a number of motorcycle shows are organised to showcase what’s new and/or improved for next year. At the moment, there’s 2 shows going on simultaneously, one in Birmingham, known as “MCN Motorcycle Live”, organised at the NEC Birmingham, and the other one in Paris, namely “Le Salon De La Moto, which is being held at the Paris Expo Porte De Versailles. Both are ongoing and running till today, the 6th of December 2015. Surely both are 1 of the best motorcycle shows organised throughout the year.
This year we decided to visit the Salon De La Moto in Paris. It’s the first time we visited this show and have to admit it was worth the trip. 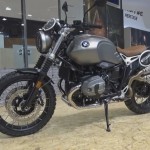 A good number of the most popular manufacturers were there showcasing their 2016 models and their concept ones too. Starting with BMW Motorrad, one of the strongest manufacturers who are constantly increasing their sales, were at the show too. This time the main focus is that on the R nine T Scrambler and the all new small G310R roadster, which is expected to be the cheapest within the BMW motorcycle range. Importance was as well being given to the F700GS, the F800GS and the C650 Sport and GT scooters, apart from the big GSs, the RT and the K models.

While Suzuki made gave much of their importance to their almost ready 2016 version of the new GSX-R 1000 and the return of the SV650, which will replace the Gladius and the VanVan 200, Kawasaki honoured us with their new ZX-10R ABS, the H2 & H2R, the good old ZZR 1400 and their Performance Sport version that will be EURO 4 compliant. Also being widely promoted was their Z800 and Z1000 roadsters and the new J125 scooter, which should be available on the market starting from Jan 2016. 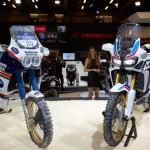 I believe this will again make a hit in the motorcycle segment. The old Africa Twin left its mark on the market and same should do this one. There’s loads of expectations on this bike and it looks like the engineers has made sure they not only meet the expectations but surpass them too. The Africa Twin should be available for sale starting in January 2016. Other than that, Honda gave us a taste of the Honda City ADV, the CB4 and CBSix50. Honda also showcased a City Adventure scooter but this isn’t the final product though, the final version should be completed in 2016 with the real one to be on the road in 2017.

Enjoy this and much more guys! Show, as pointed out earlier will end today so, if you’re a bike lover, make sure you head to the venue before the show closes!