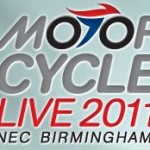 Here we are again talking about bike shows! With the EICMA in Milan and the Motorcycle Live Show in Birmingham, November is THE month for us bikes to put all aside and plan our way to either of these shows, if not both. I know a number of persons who do mark the dates of the event taking place the next year, including myself 🙂 It’s THE month for me to immerse myself into loads of bikes in a limited time ….. I just love it, it’s like paradise on earth for me!!!

The Motorcycle Show at the NEC in Birmingham is considered to be the 3rd largest show in the world, with the INTERMOT and EICMA holding the 1st 2 places. However, from my experience so far, I still prefer the show in Birmingham more than the EICMA. I have never been at INTERMOT but will share my views about this too next year, when I’ll make it to this show too.

The Motocycle Live Show has now come to an end, with the last day being tomorrow, the 27th of November 2011. It began on the 19th of November and it was Cal Crutchlos, a motogp rider, who officially opened the show. 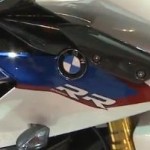 It looks like that this year the organisers wanted to leave a much better impact on the mouth of everyone, with numerous news and activities available for everyone, young and old. A number of big industry players gave their share in giving something extra this year, something that for sure would be shared for the months to come, if not years. With the “Ride off road motorcycle” theme, Yamaha gave the opportunity to anyone, knowing how to ride a bike, to try out some off road, Honda was there to give even 5 year old children to get their custom “My First Honda Licence”, Suzuki thought as well to give someting to the kids, giving them the chance to kids to try some off road  too. For those adults wishing to try getting on a bike for the first time, the Get-On campaign gave adults this chance too. They had the opportunity to try this out with qualified drivers on a one to one basis.

The venue was split into a number of sections, part of it was for shows, with stunts going on almost all day long, trial ride championships, games, interviews with celebrities, etc ….. Another part, the Touring and Escape zone, was organised to group together a number of touring companies to help out individuals to make their dreams come true. Another area was then left for custom bikes and for those bikers who wanted to show off their talent by creating and building, mainly custom bikes, from scratch, literally from the wheels up. The possibilities to buy clothing and accessories was endless and this is completely opposite to what I’ve personally experienced at EICMA. Most of the exhibitors at the EICMA only had samples to show to the visitors but there wasn’t much the possibility to buy. 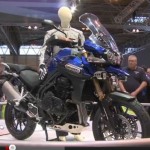 Talking about bikes, the news for 2012 were endless too! Honda launched their new 20th anniversary FireBlade and the 1200 CrossTourer, Ducati – their new 1199, Suzuki – the new GSX R1000, BMW – the new S1000RR, Yamaha – their 5 models with the anniversary colour scheme and the new 2012 YZF R1, complete with traction control, LED lights, etc …, Kawasaki – their 1000cc Versys, etc … etc …. What’s not to be left out is the new Triumph Tiger Explorer, fully ready for adventure travel; 1215cc engine, comfortable, reliable, good visibility, off road capabilities, no maintenance, etc … etc …. It’s definitely a bike to check out!

There’s much more to say about this show but we have to stop somewhere 🙂 However, before we do so, thought to mention one last bike, which in my opinion shouldn’t be left out! Victory motorcycles decided to launch a bike which is kind of the flagship touring bike, which comes complete with ABS, reverse gear, electric screen, speakers, heated seats, heated grips and, a must in today’s world, a socket to even plug your ipod in!!

Guy, gals, if you haven’t visited this year’s event, make sure you do so next year, am sure it will be even better!!!