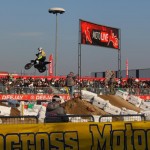 The long awaited EICMA motorcycle show came and passed already and, as every year, it met everyone’s expectations. It’s the first time I visited this show and, compared to the ones I’ve been to, namely the International Motorcycle & Scooter Show in Birmingham and the MCN Motorcycle Show in London, the EICMA is definitely the best from them all.

To begin with, the number of exhibitors is incomparable, with the major makes exhibiting their whole range of bikes. Featuring their bikes were a number of other international not so popular makes putting on show their motorcycles and/or scooters. I was impressed to see so much makes focusing their production on scooters but, in a way, I perfectly agree with them. They’re ideal for both everyday use and, at the same time, to minimise the traffic issues mainly all countries are experiencing, especially in the main cities.

There were a number of activities going on throughout the day. The main outdoor activity that was catching almost everyone’s interest was the motocross races. However, there were other activities going on, such as bicycle shows, scooter test drives, meeting with some VIPs, etc ……. They were all welcomed by the visitors.

Other than bikes, one could also have a look at grab some bargains too. A number of helmets, upgrade parts, clothing etc …. were on show too, with some of the main names, like Touratech & Wunderlisch featuring their latest addition to their already never ending options.

The only thing I was so pleased of was with regards to the number of visitors. It was so packed that one could hardly see all. I visited the show on Sunday, the last day, and will definitely not go again on such a day. I reckon I haven’t seen more than 50% of the whole show. On every stand I’ve been to I felt like the time to stay there is timed, people never stopped. Could not even take some proper photos as there was always someone passing by and/or on the bikes.

It was worth visiting this fair and will for sure go again next year!