And here we are, a new year another Dakar! We welcome 2015 with one of the most waited event / race for all those in love with certain style of motorcycles …. the enduro / adventure bikes! The Dakar set off last Sunday, the 4th of January, from Buenos Aires (Argentina), covering over 9000km, of which around 4800km in special stages! A race that surely puts ones determination and stamina into practice! It must look nice from the outside but the competitors continuously challenge themselves in desert dunes, rocky routes, endurance stages and some extreme sprints too! It’s a race not everyone can do …. adaptation to a number of constant changes in road conditions is needed!

Sunday 4th January was the 1st day of this race, with some 840km to cover, starting from Buenos Aires to Villa Carlos Pax! This stage is quite an easy one but it surely begins to put the drivers to test! This day is characterized with 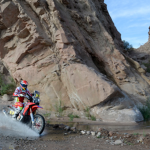 some of the best Argentinean countryside where one will show his ability to drive fast but at the same time keeping an eye on certain sharp bends! Stage 1 was won and dominated by KTM’s rider Sunderland, followed buy Goncalves on a Honda, with a variation of 5 seconds, and followed by Coma on a KTM, with a variation of 1 minute 12 seconds!

Monday 5th will see the drivers battling down over 600km from Villa Carlos PAx to San Juan! During this day the competitors will come across the longest special stage of this race! A real test with a number of changing road environment, starting with some hard terrain, off to some dusty parts and a stretch of a sandy part towards the end of the day! Interesting to see that at the end of Stage 2 we’ve seen 2 new competitors taking the 1st 3 positions, with Barreda Bort with his Honda in the 1st place, followed by Goncalves, with a variation of 6m 13s, and then by Faria, with a 9m 16s difference! 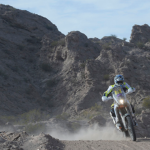 Stage 3, Tuesday the 6th, will see the competitors driving over 650km along one of the nicest regions of Argentina! The route from San Juan to Chilecito will surely give a break to all the competitors after the tough 1st 2 days, with canyon passes and red earth tracks! Having said that, they surely can’t just enjoy much of the scenery as they need to keep an eye on the number of stones across the route! It’s a nice but at the same time a dangerous one, which could easily ruin such a splendid day! End of Stage 3 saw 1st Walkner on a KTM, followed by Coma, with a variation of 40 seconds, and Barreda Bort, following Coma with just a 1 minutes 53 seconds difference!

Wednesday 7th was the time for over a 900km ride from Chilecito to Copiapo! Back to another challenging day and night, which 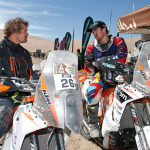 surely made the route even harder! An open sandy route, with some giant dunes, marked this entry into Chile! At the end of the day, Barreda Bort secured the 1st place on his Honda, followed by Coma on his KTM, with a difference of 1m 59s and Quintanilla, again on a KTM with a variance of 2m 49s!

Stage 5, Thursday the 8th! A day full of surprises and, for those who can handle some fast driving, to show off and move up in their ranking! Some precision handling and self control is required but one must make sure overtaking is done in the best way possible, both for the sake of avoiding any accidents and also not to lose time! This day will see the riders competing throughout almost 800km of road from Copiapo to Antofagasta! And the results for this day are now in too, with Coma leading the day on his KTM. Barreda Bort following with a variation of 2m 16s and just after another KTM, Quintanilla, with a difference of 2m 4s. 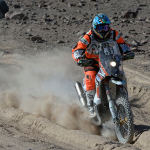 9th January, Friday! Off from Antofagasta to Iquique, an approx. 690km race through endurance terrain, mountain ridges overlooking the sea and some dunes exploration too! The highlight of this day will be the emotional encounter between the riders and the fans! This area has been affected by an earthquake at the beginning of 2014! And this day ended up with quite a surprise! We’ve seen Barreda Bart & Coma losing ground, ending up in 6th and 7th place consecutively! 1st in this stage came Rodrigues, on his Honda, followed by Price, on a KTM and then Goncalves, with a difference of 1m 10s and 1m 42s! 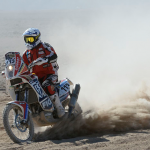 A much awaited rest day was programmed for the bikes!! Surely a deserved one after 6 continuous days of riding, with some tough terrain to go through! The bikers enjoyed a day off before they head for the next challenge, which will take them from Iquique to Uyuni!

After a much deserved rest, today the 11th of January, the bikes are back on track. Off to Bolivia with a 720km ride from Iquique to Uyuni. Being a long day that meant it had to be an early start and a good preparation! This stage will take them to an altitude of more than 3500m, with the biggest challenge being the wear and tear of the tyres ….. a special stage with large number of junctions is expecting them for this day! The day finished with Goncalves leading the 1st place, followed by Coma and Walkner, with a variance of 14 & 30 seconds!

12th January, Monday! Here they’ll be making their route back from Uyuni to Iquique. 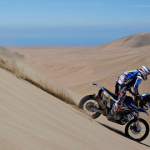 The weather here plays a very important part of this 805km ride! The route will only be confirmed on the day based on the weather conditions! If it’s dry, a 100km stretch of road in white salt will be waiting for the riders to really show off their capabilities at high speeds! Here it’s again the turn to make up for any lost time, should the driver and the bike are capable of making the best out of this special stage! Route will continue on the mountain and end up with 40km of dunes and a scary descent to Iquique. This is the year of surprises ….. there’s a number of riders that are making their names show! It isn’t the usual fight between 3-4 riders, we’re constantly seeing new news on the top 3 places of the day races! This day was finished 1st by Quintanilla, on his KTM. Pedrero Garcia followed on his Yamaha with an 11 seconds difference and then we’ve seen Svitko, on another KTM following after 12 seconds! 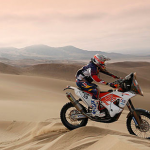 Tuesday 13th January! A 539km ride from Iquique to Calama which will see the bikers going through a 50km ride over sand and dunes before heading to a much more tough stage when they get to a route which is full of bumps, narrow roads, potholes, etc …… It’s expected to see a number of scratches after this stage! Here we are again seeing some popular names for the 1st 3 places 🙂 Rodrigues finished 1st in this stage, followed by Goncalves with a variance of 3m 51s and then Coma with a variance of 7m 34s! It’s the first time in this year’s Dakar we’re seeing so much of a big difference! Guess it was as tough as one was expecting!

Wednesday 14th January! We’ll here see the bikers again confronting themselves with a start at an altitude of more 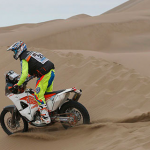 than 3600m, above sea level, and climbing up to 4670m, when they’ll reach Paso de L’Acay! Surely this altitude will restrain the competitors but will surely help the engines to keep cool! The route from Calama to Marathon / Salta is envisaged to be in the region of approx. 890km! We’re getting close to the end! Here’s again some popular riders dominating today’s race! Barreda Bort finished 1st followed by Coma, with a variance of 1m 39s seconds and then Faria, with 1m 57s! 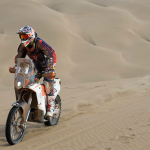 Thursday 15th January! We’re reaching the end of this year’s Dakar and surely everyone is exhausted! Here is when the stamina needs to make its job! Full concentration is expected from the riders on both the route to take and the road-book details! This 512km ride, from Marathon / Salta to Termas de Rio Honda will take them through some unimaginable landscapes! This year’s Dakar hasn’t been much like the others! 🙂 Today we’ve seen another set of winners! Jakes finished this stage leading the motorcycle group following by Faria and then Price! Variance was minimal too, 8 and 42 seconds consecutively!! This time, the 3 leading the day were all on a KTM! Surely a Dakar to remember! 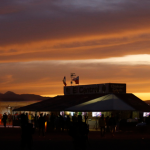 Friday 16th January, the penultimate day!! Rest? They only had 1 rest day and surely needed it but still wasn’t enough especially with the tension accumulated throughout the days and coming up to this longest stage of the rallye, a ride of approx. 1030km! Throughout the Route from Termas De Rio Hondo to Rosario will take them through a long cross-country challenge! During this stage, a fighter competitor could shake up the ranking position! There’s all one needs to make up for any lost minutes and/or seconds! Hopefully no one will be distracted by the surrounding vegetation! Here we are, the day before the end! Price lead this stage followed by Barreda Bort and Goncalves, with 1.55 & 3.02 difference consecutively! 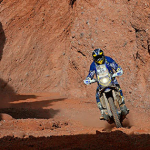 And here we are, the last day of the Argentina, Chile & Bolivia Dakar! To finish off this Dakar the competitors will be expected to ride just 393km, from Rosario to Buenos Aires! This is a stage everyone was eager to reach and to finish! This race is a challenge throughout but this last stage is something even more challenging ….. to reach the end of it is a must for every rider! They know it’s tough and they know the numbers of riders that gave up in this last stage cause they couldn’t take all the stress any longer! There they are now, all fighting to reach the Podium, some to say they’ve reached it some fighting for the title!! The Dakar finishes here, today Saturday the 17th of January!!! Guess you don’t care who finished today’s stage and would like to go straight to the point 🙂 Here you are …… 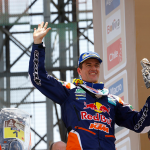 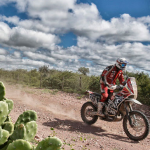 The winner of the 2015 Dakar is the Spanish driver on a KTM, COMA. Coma finished this Dakar in 46hrs 3m & 49s! Goncalves, on a Honda, finished with a variance of 16m 53s after suffering a penalty of 17 minutes. £rd place was Price’s, the Australian on another KTM with a variance of 23m 14s!