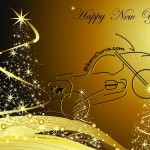 Another year off our motorcycle year! We’re at the end of 2014 and eagerly awaiting 2015! 🙂 But what went on in 2014? We had numerous news and events but believe that one of the most epic ones was the London to Magadan “Road of Bones Expedition” organised by Compass Expeditions, of which was also filmed by Robin Newell, known to be one of the best documentary film maker! For those who doesn’t know, this will eventually be up for sale as a DVD series, with a view to be out for the public early in 2015!

I’m sure that everyone remembers the Dakar competition and the surprising MotoGP season! Surely they’ve been 2 great races one will remember! Another memorable event some of us might remember, especially those who have joined in in person were the Harley days in Spain and the BMW Biker Meeting at their usual and surely well located place in Garmisch Partenkirchen! Some other events one will remember are the INTERMOT in Germany, the Motorcycle Live Show in London and the MCN Show in Birmingham! Those who atended surely remember the atmosphere and excitement there usually is in such venues!

Throughout the year we were also given some updates on the 2015 models, be it by BMW, KTM, with their new Super Adventure, Honda, with their new Crossrunner, etc …. What surprised us too was the launch of the new 4 wheeled scooter, the Quadro4! A negative but at the same time mind assuring news was given by BMW to all RT owners to stop riding their machines due to some technical fault on which they were already working on! Luckily enough, there was no reported injuries!

We then had some reviews that were surely important to all those considering such items / vehicles! We reviewed the Suzuki Burgman, the new Caberg Tourmax helmet, the first HUD helmet and the new Conti TrailAttack 2! Some interesting news / ads followed then 🙂 The presentation of some of 2015 tours offered by a number of motorcycle tour agents, the new BMW riding course tips, etc ….

We’ve had a busy year but we can’t say we didn’t have some fun too! We went through the pros & cons of having a girlfriend biker 😉 and enjoyed a couple of events organised especially by BMW, for example the Oktoberfest which was organised by BMW Motorrad in Alton, UK! What a year!!!! We loved it and am sure you did too with us! Oh, another important thing we’ve been through together but that I haven’t as yet mentioned …. the discounts offered by one of the today known suppliers of motorcycle accessories, helmets, clothing, etc ….

For those who love traveling with their bikes, we’ve also pointed out a couple of MUST-DRIVE-THROUGH roads in the US! For those traveling often with their bikes, do keep an eye open and be safe on the roads! This is even for those who commute with their motorcycles on a regular basis! Thanks God some are even working to offer us some improve road safety! Watch it if you do your own repairs and aren’t a pro!!

And that was basically 2014 together! We wish you all, your family, friends and colleagues “All The very best for the New Year!!” May God stays with us to pass another year!