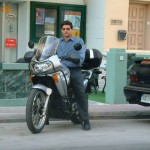 I bought this Honda Transalp XL650V1, a 2001 model, with only 800km, directly from it’s 1st owner. I used to ride it almost every single day, be it sunny, cloudy or raining and I feel that it’s the best all rounder for the streets of Malta, a tiny little island in the centre of the Mediterranean Sea.

It’s not light, thus it gives that good steady feeling but it’s not heavy, thus giving the rider the change to handle it properly. Engine size is just perfect, especially on an island where there’s no highways and that every road is full of junctions and terminates in just few seconds driving on it! Yes, for those who have never been to the Maltese Islands, these are the kinds of roads one will find over here 🙂 Suspensions? Ahhh, you need these kind os suspensions on the kind of roads there are here. It’s kind of smooth off-road driving every single day but it’s fun, at least you can quickly get used to off-roading if you’re a beginner!

Maintenance? Just take care of the usual regular service and you’re fine! Just ride for years without any problems. However, quite strangely, after around 3 – 4 years, for some reason or another, I had to change the steering bearing. Well, it could be cause of a small defect during manufacturing as a number of others who own the same kind of Transalp never had this kind of problem.

I definitely suggest this bike for every day use and especially to those who are kind of beginners, looking for such style of bikes and wishing to go for something bigger, after a couple of years, with a small engine, riding bikes. The Transalp was for me the perfect step forward, after my 125cc bike, as to then go for what I went for today ……. having in hand a beast, the BMW R1150GS!!!