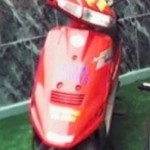 Am sure that you all would say “Why on earth he opened his blog with such an article?”! And, yes, let me tell you.

Last week I was talking to someone who’s really into scooters and motorbikes and were talking about bikes in general. At one time, someone came with a Hyosung sport bike and I’ve commented, saying “wow, Hyosung are really trying their best nowadays”. At that same instance the person I was talking to answered that the Hyosung scooters and / or motorcycles of today have nothing to do with the ones of the past! I then asked whether they got worse 😛

I reminded this person that I once had 2 Hyosung 100cc Scooters and he continued by saying that I did swear a bit then, cause of the troubles they must have given me, especially since mine were the 1999 – 2002 models. Let me tell you what I really think about them!

If you’ve read my “About Us” page, you would know that I once had 2 and these 2 were mainly bought for rental purposes. I’ve kept these for 2-3 years and, when they were not out with some clients, I used to use them almost every single day. I remember that, in these years, apart from the few problems it gave me at the very beginning to start them, then I never know I ever had any problems.

One have to bear in mind that these were used regularly and for rent too so, for sure, they were not taken care of. It’s true, when I used to park them next to some other small scooters, mine used to look like toys 🙁 😛 but I never had any complain that they were slow, not even when I used to rent them out and used with 2 persons on! They weren’t a Piaggio or a Peugeot but they really surved for their purpose! I used to give them “regular” service but that’s it, then back on the road. Scratches? They had as much as one wanted to but still used to keep running and still used to make my clients enjoy their time with them 🙂

This person was shocked, especially when I also pointed out that in these 2-3 years I managed to do some good money out of them AND I managed to sell them at a good price too 😛 Yeah, some might say I’m one of those luckiest guys on earth cause of this, and maybe I was, but only cause of that!!! 😀