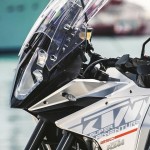 In these last couple of years KTM surprised us with a new 1190 Adventure, making way for a new big adventure bike to compete with BMW’s R1200GS! KTM didn’t stop there though ….. a New KTM 1290 Super Adventure will be launced at the Intermot Motorcycle Show in Cologne, on the 30th of September!

Built following its predecessor 1190, the new Super Adventure will join the vaste range of already existing bikes! BUT this bike will will offer a number of features to those who wish the best from their Luxury Sport Touring vehicle! 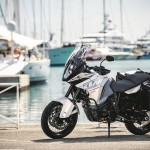 The technical aspects of this bike and engine are still classified as “Confidential” but there’s some leaked info saying that the engine will be that of the Superduke R but with more power and torque! What’s being said as well is that this revised engine will give as well more km with every full tank! There’s also some rumors about offering better luxury!

Just like the 1190, the Super Adventure will enjoy the Stability Control system, known as the MSC! Just like the other adventure bikes, KTM has partnered with Bosch to offer added security with their ABS, Traction Control which can be controlled to taste as not to lose and pleasure during riding. 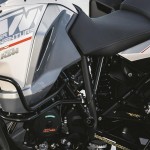 What’s interesting is what the Austrian mother company is saying, that this NEW 1290 Super Adventure will come out with an assisted driving equipment which will be absolutely unique!! More info is expected to be revealed on the 30th of September, during its official launch at the INTERMOT Motorcycle Show in Cologne, Germany!

KTM is more & more doing its best to come up with an Adventure Bike that will fight equally with the other Adventure bikes, mainly the Yamaha Super Tenere & the BMW R1200GS/A LC! Surely, with the already popular 1190, KTM showed it can cope with the competition and we’re expecting this new beast to fully compete with the best!!